N.B. I'd forgotten I'd dashed this off back when Osman's book first came out. Apparently I'd thought better of submitting a rather negative piece but now I've reconsidered. I've never been a fan of Osman's conceptually overdetermined work. Yet this was was a book I held out hope for when it first appeared. Instead it proved to be a deep disappointment.

This book-length poem-essay is written in the spirit of Benjamin and Sebald (with a nod to Paul Virilio’s work in “War and Cinema”), focusing on the construction of the historical gaze. How do public “figures” – commemorative statues by and large erected to mark military campaigns and victories – shape, that is, figure public space? These lieux de memoire, as Pierre Nora calls them, not only elegize historical events, but inform the social and psychological commons, the space of everyday life.

The book hinges on the conceit of the statuary gaze. “The idea occured.//Photograph the figurative statues that populate your city. Then bring the camera to their eyes (find a way) and shoot their points of view. What does such a figure see?” In the photos that accompany the text, we get a few underwhelming shots of some statute’s line of sight, which is hardly the same thing as “what they see.” 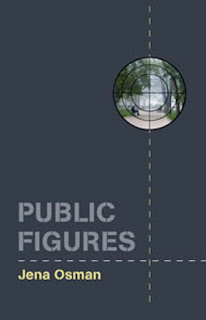 This method wants to provide a powerful way to think about public space though it runs the risk of de-historicizing the very issues Osman wants to re-historicize. Statutes don’t gaze but are meant to be gazed at, of course. But if they could be said to gaze at all then what they see is neither the past nor the future, but the present, mapping it as an eternal now stripped of trauma, a kind of amnesia performed in the very act of commemoration by which civilization elides its own barbarism. As Benjamin remarked, “historicism is a vulgar naturalism.”

Public Figures follows rather loosely a tradition of documentary poetics that runs from Muriel Rukeyser’s “The Book of the Dead” through much of Charles Olson and Susan Howe’s work on American history. Like Olson and Howe this is a book about the latent possibilities of form, especially form conceived of as an act of political intervention. As a meditation on history however it is somewhat banal. As a meditation on the possibilities for the non-lyrical poem it breaks some new ground, but occasionally where it reaches for the essayistic mot juste only manages the flattest of platitudes.

Image: Thinly masked critiques at the end of the disasters.
The leader as bishop is a hawk with heads sutured at the ends of each wing.
With knees in the mud.
The parrot, the ass, the dog, the monkey, the wolf.
Infantalized humanoids, all cower in their bestial cover behind the leader like a
cloud, his wings holding back their perfidy of which he is a part.
You are the shadow at the back, looming like a trace of escape.


Caption: Man with safety orange sweater looking in backpack, then putting it on back.
Man running while on cell phone. Family of three. Troupe of charlatans.


Story: You’ve been evaluating your options. On the one hand, all has gone according to plan. On the other hand, you feel yourself losing your motivation, your focus. The data set is missing a crucial page, buried at the scene. Focus on what matters: Timing. Persistence. Clarity of purpose. The landscape is secondary.

The three tiers of response move from immediate perception to common details to fractured narrative and confused self-reflection, inviting the reader to take part in the process Osman follows in her historical detective work. The effect is deliberately unsettling and disjunctive, with the richness of impression giving way to a deflated language of evaluation. This kind of writing, nurtured during the 90s at grad programs in Buffalo and elsewhere, strains for a new kind of verisimilitude, mixing genre styles, collage-like, to affect a new dialectical image, as Benjamin describes it, whereby disparate objects from different cultural moments produce a sudden illumination of the past. But the effort falls short.

To be fair, Osman’s not really after lyric intensity here. The deliberately prosaic tone of her anti-poetry works to fend off the temptations of the merely beautiful, as if beauty and political commentary were somehow incompatible. (By way of contrast one thinks, for instance, of the late work of Geoffrey Hill, whose inquisitions into the power of the state ring with lyric fury).

No one could ever accuse Osman of acceding to the demands of melopoeia, much less actual prosody. For her, a poem is as dry a report on experience as an annual corporate earnings sheet. She’s a specialist in deflated frisson. The idea here seems to be that ekphrastic writing can not only be bent toward political ends, but that by producing a warmed-over dialectical shock of recognition the reader will be jolted into new awareness of public space. While some of the poems here do accomplish that most of them merely reify the very thing they want to reveal.

Interspersed with the book’s reflections on statuary, snippets of military jargon culled from The Forever Wars in the Middle East act as vaguely intended counterpoints. These are transcripts, we are informed, from various drone pilots to be found on You Tube. The language of course is clipped, dry, matter of fact. It’s difficult to know what Osman intended to achieve with this gimmicky juxtaposition.


There’s no indication if these communications have been altered or edited, as seems the case, or if Osman transcribed them as is. This is in itself constitutes a case of bad faith, the verbal equivalent of presenting edited footage, with its elisions and cuts, as “the way it really happened.”

For the most part, Osman’s project in Public Figures is resolutely local, focused on her own immediate environment in monument-rich Philadelphia (she is a professor at Temple), a city awash in patriotic “heritage.” She conducts her interrogation of the lived experience of public spaces in order to probe the way they shape the political unconscious of the daily personal sphere, the background replacing the foreground.

But one wonders how she might have dealt with something on the order of St.-Gauden’s monument to Shaw’s 54th regiment in Boston. Its famous rejoinder, Robert Lowell’s “For The Union Dead,” does some of the anti-monumental cultural work Osman takes on, splicing present with past. Lowell’s poem is charged with tremendous affective energy, a quality conspicuously lacking in most younger experimental poets today, who eschew emotion for the kind of desiccated clinical language of a theory seminar. One might call it poetry by poets who can’t write poetry. In the 1990s this seemed radical, offering the hope for new possibilities in poetic rhetoric and critique. By 2012, it’s become dated: formulaic and, finally, forgettable.

Posted by Patrick Pritchett at 5:54 PM