And the stars have shut their eyes
and the earth has changed its course
and in the blink of an eye I am gone.


I am gone/I am gone
the water goes on, underground
it flows on

Posted by Patrick Pritchett at 2:04 PM No comments:

Alfonso Cuaron’s Gravity took my breath away, especially in the sublime opening scenes, where the astronauts undertake their tasks 600km above the dazzling surface of the earth in a series of ballet-like movements which the camera’s whip-like tracking orchestrates to utterly entrance the eye. The first ten minutes of this very tightly economical film of 91 minutes is a mini-tour de force.

Sadly, though, what starts out as a voyage into the possibilities of the beyond, becomes a very predictable survival story – riveting, to be sure, but anchored by the trite narrative arc of the triumph of the human spirit, as embodied by the ever-perky – but also immensely watchable – Sandra Bullock. The camera lavishes an unseemly amount of attention on Bullock’s buttocks – and the rest of her, as well, which is as perfectly sculpted as one would expect from a multi-million-dollar star. Call it eye-candy in space.

Richard Brody – in my opinion, the most discerning film critic in America right now – launches a devastating attack on the film in the online version of The New Yorker. His tirade is aimed at both the plodding humanist clichés of the film itself and the accolades the critics – like his colleague, David Denby – are lauding it with. In this fraternal sphere of mutual admiration, no real critical work can be done, according to Brody, and while I largely agree with his indictment of the film and its critical reception because it addresses a much larger problem, I take issue with his charge that it lacks any meaningful sense of interiority.

This clearly comes through in the back story scenes, where Clooney’s Matt Kowalski, the consummate veteran professional, unflappable in the face of crisis, drags out of Bullock’s character, the absurdly named Ryan Stone, her tragic history – motherhood, dead child, spiritual desolation – check, check and check. Cue grieving strings. The interiority is weak, yes; barely sketched out in the hackneyed way of many Hollywood movies, yet these characters do have inner lives, even if they consist of pure proceduralism and corny tics, as in Clooney's character, who listens to country music as he zooms about. The egregiously shameless and sentimental bait of the dead child smacks of the most cynical calculation, evidence of what Pauline Kael once called "contempt for the audience." One can easily imagine much more compelling arcs for both these characters. Instead they are reduced to components in a complex physics problem that also poses, preposterously, as a work of mourning.

Brody seems largely disappointed that Gravity is not 2001. But what film could be? Still, he's right – a huge opportunity was wasted here. Gravity is all technique and no soul.

The film goes downhill after Kowalski sacrifices himself to save Stone. The rest is simply a gripping procedural about a plucky-bootstrap-gal and Bullock is great in it. This is what she does best. (That, and zero-gee striptease, which, reader, seen in 3D, on an XD digital screen, is not totally a bad thing. But no, really, it is). 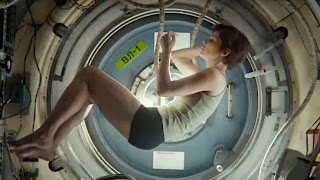 The film’s geopolitical logic takes over then, with Stone leap-frogging from the ruined American shuttle to the International Space Station and its Russian ship and from there to the Chinese shuttle, also a bit of a shambles thanks to the Russians setting off a chain-reaction of catastrophic space debris by blowing up one of their own spy satellites. Meet the new Cold War, just like the old Cold War.

Bullock manages not only to maneuver her way through this impossible crisis, but put behind her the devastation of her young daughter’s death. It becomes, in other words, not a story about the consequences of the colonization of orbital space, but one woman’s triumph over adversity. That she’s a) American and b) swiftly and shrewdly commands both Russian and Chinese space modules to splashdown in a final, over the top, rebirth, is not really worth commenting on. Except to say that anxieties about globalization and the precarious future of a totalized capitalist sphere of influence for which orbital space is both the actual and allegorical arena are the film's repressed contents. The entire network of international trade and exchange -- in other words, the world system, the totality of circumnavigated space -- is fragile, always poised on the brink of the next calamity.

Posted by Patrick Pritchett at 4:46 PM No comments: