Rachel Blau DuPlessis’ latest work, Graphic Novella, (Xexoxial Press, 2015) represents both a break from and a continuation of the work she began in her path breaking five volume long poem Drafts. Break, in the sense that new formal techniques are being explored; continuation because the key themes of Drafts are still in play, albeit in a more micrological vein. 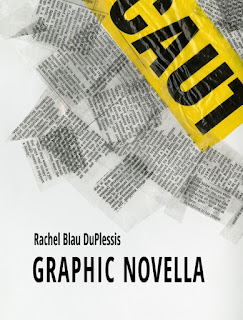 In The Collage Poems of Drafts, an outlying, post-Drafts work, DuPlessis pushed into new territory, territory already implicit in the jagged jointures of Drafts. The Collage Poems (Salt, 2011) stakes its claims on our attentions through its enticing and uncanny melding of text and image, forging new collage-ideograms as part of its extra-verbal texture: a way to both embody the fullness of the word and at the same time, point beyond it.

Jack Spicer once wrote that a poem should be a “collage of the real.” “I would like to point to the real,” he remarked, “to disclose it, to make a poem that has no sound in it but the pointing of a finger.” What’s missing from this mystical pop-Zen vision is that a poem is nothing, of course, without sound; indeed, a poem is in some ways nothing but sound. That is what constitutes the desideratum of its thingness, Spicer’s impatience with mimesis notwithstanding.

DuPlessis does not ignore this, even as she intervenes – cuts into – the word by way of the image. She, too, turns to the power of pointing, or rather, presenting clusters of images, not for commentary so much as a way to disrupt the intrigues of plot. The images offer a density not easily submitted to meaning. Rather, they are part of a plot for “cutting down the rays of the plot,” as she puts it. “Rewiring, rerouting, rewriting.”

The oversized format of Graphic Novella is designed to foreground both its amplitude and its skeletal anti-plot, which unfolds as a series of returns, re-visitations of past work and recursive reticulations of outrage and frustration against the systematic rendering of the subject’s increasing invisibility via the reifying properties of plot. Plot here might be understood more broadly as scheme, as in the universal scheme of capitalist culture to erase personhood. In contemplating the image of two Canon EOS 70 cameras (remember cameras?), the lower one inverted, DuPlessis writes:

The working conditions of being under the sun in the vast
and nimble spaces
of aggressive ruptures and attacks on civic coherence
are such that
cannot hold to one lens when the splay of directions
intensifies, when the twists of connection and misses get more grotesque
and garbled. As they do
round the clock. Insomniac almanac.


“Insomniac almanac” might serve as the motto for the 24/7 cyber-culture we live in now, with its ongoing destruction of time and solitude, a new kind of seasonal calendar in which all seasons are reduced to an empty sameness.

The poem-essay’s major tone is interrogative and in this it follows Drafts; the poem as inquiry and investigation into memory, cultural constructions of the self, and the possibilities of language to resist or unsettle such constructions. Graphic Novella undertakes a kind of auto-textual archaeology, exhuming the fragments, shards, and bones of abandoned writing and, by way of subjecting them to intimate scrutiny, re-constructing them, in whole or in part.

The sense of loss, of the struggle to reconnect with origins, or rather, beginnings, false starts, pervades this book-length poem. When is a start real and when does it fail its promise? This is the dilemma of every writer and DuPlessis has made it her central concern in this labyrinthine poem, privileging process over product.

“Forget art,” she admonishes herself and the reader. If you came looking for pretty here, you’re in the wrong place, bub, though many lines ring with a crystalline vibration. In the wasteland of commodity culture, the poet must become a bricoleur, focusing not on unified vision, but on the scraps and fragments left in that culture’s wake – a detective of the whole. This is the fate of late modernism. Shoring up is hard to do.

One gets the sense that in composing Graphic Novella DuPlessis created the collages first, then wrote her commentaries on them. This impression is reinforced by the book’s layout, with the images occupying the right-side pages and the text laid out on the left. If we were to think of this as a bilingual (bi-visual/textual) work, the relationship between the two would be that of collage cluster translating original text. Yet this isn’t quite right either. The poem forces us to read in reverse, as it were. And commentary is too blunt a term to describe the interaction and dynamic tension between word and image. It’s a more oblique, sidelong process – inviting and forcing the reader to take in the image first, then read the text, then turn back to the image, then re-read the text. The very acts of reading and seeing are thus the actual subject of the poem, an intricate mesh of post-mortems. Perhaps, the poem seems to suggest, all readings are post-mortem. But if they are, they are also resurrectional, a calling up of the lost, the forgotten, the abandoned, as a way to bear witness, or as DuPlessis wittily puts it “withnessing.”

The poem closes on a haunting provisional note: “looking for/a page that cannot be turned//because it is inside the page.” These lines are spread out between three mysterious photos of unknown strangers, dressed in their Sunday finest, gathered at some event decades ago. They stare back us as we stare at them. What is it that is inside the page, then? Not essence, not resolution, but the desire for another page. Each page has the potential to open a narrow messianic gate through which another word, another image, another page, might slip.

Posted by Patrick Pritchett at 1:04 PM No comments: