NB: Jenny Dorn asked me to contribute this brief homage to "Square One" after Ron died. The journal name was a post 9/11 reboot of her late husband Ed Dorn's "Sniper Logic" which was underwritten by the University of Colorado. There were a lot of "qualms" going about in those days and still are, I suppose. A typical case of santicmonious CYA.

But here's to Ron. An inspiring figure. May his spirit continue to exasperate and provoke.

The first time I met Ron Sukenick it was to interview him in his home for the Boulder Daily Camera. The occasion was the 20th anniversary of the Fiction Collective, which he’d begun in 1974. My editor, Juliet Wittman, warned me that he was not a man who suffered fools lightly. Contrary to this ominous warning, however, I found Ron to be tremendously warm, gracious, and hospitable. That hour or so spent in his study impacted me in a way hard to underestimate. I’d just moved to Boulder from L.A., where I’d worked as a script consultant in the film biz, but where I’d also started up my own short-lived, renegade poetry journal. (Featured here, a great photo by Douglas Messerli): 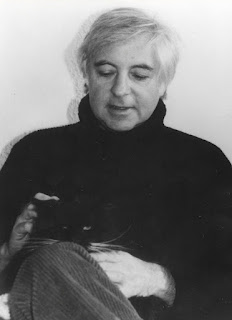 When Ron heard about this, his eyes lit up. “You’re one of us,” he exclaimed. That feeling of acceptance provided a much-needed orientation to a larger literary landscape. Along with discovering and befriending Naropa poets Jack Collom and Anselm Hollo, my friendship with Ron helped to lead me out of my years in the wilderness and into a common conversation about the writing life, one that continues to sustain me today.

It’s difficult to sum up a career as varied and energetic as Ron’s. What follows is from my introduction for him at Left Hand Books in May 1999, at what I believe may have been his last public reading in Boulder. I have kept to the present tense because the work itself remains with us.

For over 30 years, Ron Sukenick has been a singular presence on the American literary scene. Radical novels like Up, Long Talking Bad Condition Blues, 98.6, Blown Away, Doggy Bag, and Mosaic Man have reshaped the way we think about the possibilities for a vital contemporary literature – one that takes up its position on the contested & ever-shifting border between postmodern configurations of the self and the iconography of pop media culture. He is also, let me quickly add, one of our most scabrously funny writers.

Sukenick’s fiction tirelessly reinvents the idea of fiction. As a pioneer of the poetics of resistance and disruption, he raised the stakes of the game to a new level, a level where, to quote from his book In Form, the task of the serious artist is seen as “a strenuous investigation into the laws of reality ... beyond the bounds of convention.” The imaginative power of art carries not only an oracular function, by which new categories of the real are disclosed; it also requires of the artist a genuine ethical concern, which Sukenick defines as “an obligation to the truth of things as revealed by formal thinking.” Both through his own writing, and through the establishment of his small press, Fiction Collective 2, and his literary journal, The American Book Review, Ron Sukenick has worked to insure that the revitalizing energies of a truly dynamic literary underground will continue to thrive – that is: to subvert, upset, shock, exasperate, bedevil, and electrify the complacent consumers of culture everywhere.

Beauty, we all know, is difficult. Tinker to Evers to Chance. Beardsley to Yeats to Pound. Part of the job for us now as writers is to re-think what Pound called “To Kalon in the marketplace.” How may beauty now relate to commerce? For Ron, it meant moving past the idea of beauty as a bulwark against mass culture. As he said in his interview with me: “Mallarme’s idea of the writer working to ‘purify the dialect of the tribe’ was very elitist. I like the language of the tribe. Maybe the job of the writer is to muddy the language of the elite, to get popular language into literary language.” Ron did this with inestimable verve, cunning and flair. Vale, ave, baby.

Posted by Patrick Pritchett at 10:54 AM No comments: