On "Roses: The Late French Poetry of Rainer Maria Rilke"

David Need's masterful translations of Rilke's late work in French are now available in an exquisite edition from David Wofford's Horse & Buggy Press. The artist Clare Johnson has produced a series of interstitial, stand-alone ink drawings which add a whole new dimension to the poems and Need has provided a beautiful autobiographical meditation on what Rilke means to him -- and us -- as an afterword. This is one of the most sensual books, in every sense -- spiritual, erotic, and tactile -- that I've come upon in some time. I'm delighted to have been asked to contribute, along with Joe Donahue, a blurb, which you can read below. It's also a substantial contribution to the vast body of Rilke scholarship and translations in English. 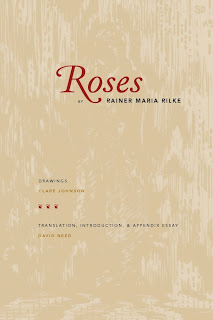 "Rilke sang of actual roses, the tangible incarnadine flower, not some abstract Platonic ideal. In these intimate and luminous translations from his post-Elegies work, written in French, David Need rescues Rilke from the cult of New Age positivism, restoring his uncanny mystery, his harrowing commitment to dwell along the perilous and empowering borderline between inner necessity and a manufactured world of dead objects. The realm of Rilke’s roses is chthonic and immanent. All aperture and cusp, fold and further fold, the flesh of the rose’s petals permits both a bantering playfulness and the most profound experience of evanescence and fragility. Because they die into themselves each day, Rilke’s roses are always undergoing loss and transformation; they are his highest allegories for praise and finitude, Orpheus and Eurydice conjoined. In the classic Rilkean gesture, they are always departing, always arriving – the impossible moment of plenitude and emptiness, Celan’s niemandsrose – the poem that knows itself by knowing no one. Or as Rilke has it: 'no one’s sleep beneath so many lids…'"

Posted by Patrick Pritchett at 9:11 AM No comments:

The Blunt Edge of Tomorrow

Edge of Tomorrow – a highly entertaining if overlong mix of preposterous metaphysics and uber-meta-cinematic technique – is when, all is said and done, the most elaborate cute-meet and courtship film perhaps ever made. It’s also a movie about how a novice version of Tom Cruise, wimpy and unsure of himself, learns how to become the unstoppable professionalized Tom Cruise. In other words, a kind of boot camp for stardom.

The logic of the film is the Mulligan – a golfer's series of endless do-overs. (I should know; once reader, I did golf. Badly). This produces a kind of philosophical slapstick that is very amusing and a subtle if not sufficiently elaborated critique of the working of capital and everyday life. You have to wake up. You have to go to work. There's always some guy yelling at you to pick up the pace. Repetition, as Adorno might say, is the lynchpin of capital, the human body reduced to a machine performing the same tasks over and over.

Cinematicaly, it works because it’s entirely consistent with, indeed, evolves out of the principles of montage. A logical inference of causation or association is established by simply cutting from one image/scene to a parallel one. The audience fills in the gaps. The gaps -- both cinematic as well as narrative -- consist of jumps in time. The script is smartly constructed; as Richard Brody remarks, it's "Groundhog Day meets Saving Private Ryan" (which is probably just how it was pitched, I imagine).

Brody is right, too, when he points out that Doug Liman, the director, missed a chance to explore the script's implications of a truly harrowing existential crisis: what it means for a person to become unstuck in time, ala Vonnegut's Billy Pilgrim, or Traven in Ballard's "Terminal Beach." Pilgrim's journey becomes a martyr's progress, but Traven grows deranged. Cage's name indicates his predicament: the trap of endless resurrection, which is also the dilemma Stanislav Lem (as well as Soderbergh) investigates in Solaris. Instead, Edge of Tomorrow is content to revel in its nested doll/maze-like plot about continual reiteration. This is the logic of FPS games. But it also mimics the film production process -- next take, better take/fix it in post -- and indeed, the marauding aliens are called, for reasons that go unexplained, "Mimics." 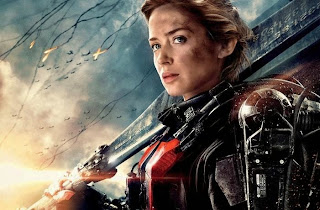 But the end result of repelling the alien invasion and its lotus-like hive mind, glowing beautifully at the bottom of a flooded Louvre like a mammoth Damien Hirst installation, is only to serve as prelude for Cruise’s naïve, shirking Major Cage to learn how to become a fitting match for the Angel of Verdun AKA Full Metal Bitch, played with cut-throat aplomb and glistening deltoids by Emily Blunt, a blue-eyed beauty who suffers no fools as she wields an enormous carbon-fiber blade like some avenging Valkyrie. "The Angel of Verdun," of course, is a famous sculpture by Rodin which, if memory serves, Geoff Dyer writes about in his wonderful book on World War I memorials, "The Missing of the Somme." So "Edge" is also a film about star-crossed lovers and destiny and all that rot. To win the war, the hero must learn how to win the heroine. The rest is not silence, but explosion.

The credit music for Edge of Tomorrow should have been Chrissie Hynde's sardonic "Like in the Movies," (from Stockholm): "the audience goes home satisfied/because nobody really died." I went home satisfied, in a Hollywood popcorn sort of way, even though the film annoyed me no end. It's impossible not to compare this film to Cruise's last SF outing, the vastly inferior "Oblivion." Both hinge on replicating the hero through multiple iterations; "Oblivion," via clones, in "Edge," through constant re-births. Has Tom Cruise (who's better here than he has been in a long time) acquired some kind of ironic distance on his own image, offering us a commentary on stardom's emptiness? Or has his vanity metastasized, achieving some kind of infernal Omega Point of the image, disappearing up its own fundament?

Posted by Patrick Pritchett at 6:36 PM No comments: