The pseudo-melancholy of late Stallone in recent films like The Expendables and Escape Plan points to a small but important shift in how aging American masculinity is represented on the screen. Whereas Sly used to stand as an exemplar of the Reagan era “hard body,” as Susan Jeffords put it, he has now cannily reinvented himself as a new kind of iconic figurehead – the aging hero, battered by loss, yet still determinedly loyal to his comrades and his code, fighting the good fight against insuperable odds or a corrupt system or regime.

Physically he has become even more beautiful, that is, more ugly and battered. The voice has dropped even lower – every word is uttered basso profundo, as though he had found a way to reduce the Book of Genesis to the intonation of a few grunted monosyllables. Stallone’s perpetual hangdog features – the drooping eyelids, surrounded by scar tissue (real or make up?), the thick sensual mouth, often wrapped around a cigar – have become exaggerated with age and signify a comfortable, if grotesquely nostalgic view of American manhood post-9/11. He no longer asserts his dominance directly, but instead asks us to take him in, a stray dog buffeted about by the radical changes to the cultural status of maleness. “Save the Dinosaurs” might be his bumper sticker. His leathery carapace acts as a kind of armor – both deflecting danger and making him, by dint of all his wrinkles, even more vulnerable. Poor Sly – always so forlorn and laconic.

In these late films he has come into his perverse own as an exemplar of minimalism. Not unlike two other genuine masters of acting minimalism in cinema, John Wayne and Clint Eastwood, he has found a way to turn his liabilities as an actor into his greatest asset. Rocky and Rambo were figures whose besieged grandeur derived from how the system they trusted in betrayed them. This is the core of the Stallone brand and he has figured out how to keep selling this decayed aura through the current form of weak cultural anxieties. But the real genius of Sylvester Stallone is that he has become the high priest presiding over his own funeral. The Expendables is a plea for the utterly dispensable.

Post-script: The title, The Expendables, conjures up images of sacrifice, or even a kind of noble nihilism, but of course nobody but the baddies die in these films. It's all a comic fist-pumping brofest. A far cry from one of the best films about war ever made, John Ford's magnificent They Were Expendable (1946). In Ford's vision the best men are routinely slaughtered in the line of duty. 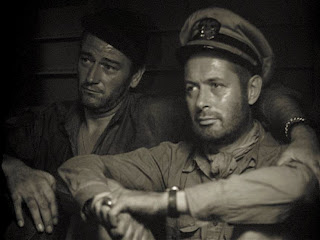 As the Duke puts it in a moving funeral scene, after the US troops have been beaten down in the Phillippines:

"Serviceman is supposed to have a funeral. That's a tribute to the way he spent his life. Escort, firing squad, wrapped in the flag he served under and died for. In a war you gotta forgot those things and get buried the best way you can. You all knew Squarehead Larson and Slug Mahan. They were just a couple of bluejackets who did their job and did it well. Squarehead Larson -- he was the best cook in the Navy. He loved the old Arizona. Now they're both gone. Slug -- he was always quoting verse, bits of poetry. So here's one for him. It's about the only one I know"

Under the wide and starry sky
Dig the grave and let me lie:
Glad did I live and gladly die,
And I laid me down with a will.


This be the verse you 'grave for me:
Here he lies where he long'd to be;
Home is the sailor, home from the sea,
And the hunter home from the hill.

The new Robocop lacks the razor-sharp satirical edge that made Paul Verhoeven’s 1987 film such a delight. It also lacks the pathos. In the original Robocop Murphy, as he begins to reclaim his humanity, finds himself devastated and utterly alone, his wife and son having been told he’s dead. His predicament is more than one of the usual anti-hero’s existential alienation – having lost both his family and his very body he’s condemned to a posthumous existence. He is a man who has outlived himself.

This Robocop, rather absurdly, yet cunningly, places family at its emotional center. Instead of recoiling in horror from what her husband has become – a mere stand-in for himself, a grotesque remnant, straight out of a horror film – the wife (played by Abbie Cornish of the appealing, defiantly upturned nose) adopts a fiercely loyal “stand by your man” attitude. What’s compelling about this approach is that the idea of Robocop has been made over into a rather effective allegory about returning vets who’ve undergone traumatic injury or prosthetic surgery in Iraq and Afghanistan. This is a palliative Robocop. It offers the impossible dream of redeeming both the shattered body and the families who have been broken apart by ten years of useless war in the Middle East.

This is emphasized in two key scenes: the first, before we even see the unveiled (and grossly dismembered) Robocop, who is now little more than a head and a pair of lungs, is set in a clinic where a guitarist with a prosthetic hand magically learns how to play again (the music is Joaqin Rodrigo’s “Concierto for Aranjuez,” a clear signal to NPR-liberals). The second takes place in the closing shot of the film, where the reunited family stands resolutely inside their doorway as the camera dollies back, standing tall together, come what may, even though the hero/father is permanently maimed, imprisoned in a monstrous metal body, incapable of anything but feeling the harrowing absence of human touch.

The romantic appeal of the new Robocop is that no matter the damage inflicted by trauma, by the state, by technology, by the colonization of the body, there remains some spark of soul and humanity that cannot be subdued. This is the stuff of Hollywood and humanist dreams. Spirit will always triumph over fate. But as Jake Barnes more astutely surmises at the end of The Sun Also Rises, “Isn’t it pretty to think so?”

Posted by Patrick Pritchett at 3:19 PM No comments:

I'm very pleased to announce the publication of SONG X: New and Selected Poems, just out from Talisman House Publishers. SONG X collects work from seven previous books and chapbooks and one artist's book, co-produced with Charles Alexander and Cynthia Miller and released in a very limited edition. With the earliest poems dating from the mid-90s, SONG X gathers over twenty years of work, much of it in the tradition of the gnostic postmodernist lyric, from books that are either out of print or hard to find. It also includes a generous offering of new poems. 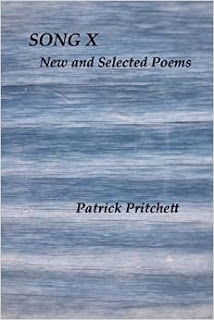 "I hear the motion in these stirring poems as radiant spans of thought, 'the Auto-Graphic gesture of becoming.' A reader will experience the recurrence of a most ancient way of being lost, a world stranger, a visitor here, an X who travels in one long single take. For Pritchett, the word is the sign of a divine spark that must be continually fueled by more thought. Not cinematic: secret. The poems unveil an orange glow behind loneliness, a color beyond erasure." --Fanny Howe

"Patrick Pritchett's Song X takes its title from the classic free jazz album by Pat Metheny and Ornette Coleman. And like the music on that album, Pritchett's poetry seeks to wrest itself from the inherent materiality of its making so that it may achieve an impossibly pure spirit of lyricism. As the poet declares, 'this is the beauty that smites the city,' a visionary assault that comes 'In the asterisk that occludes or names each event.' Song X contains a generous selection from Pritchett's earlier collections, including Burn, his daring 'doxology' on the martyrdom of Joan of Arc, and Gnostic Frequencies, a work that as clearly reveals the antinomian and acosmic impulses that are shaking up contemporary American poetry as any I might name. To read Pritchett is to walk upon 'the ground / that undescribes you.' And that is holy ground." --Norman Finkelstein

"Patrick Pritchett is an exceptional poet. His revelatory Song X is a gift of life and years and gives up many joys and lived private truth. He is not afraid of beauty and its formal intellect in the estate of song. It's great to have this essential gathering of his work, it's a great book." --Peter Gizzi

Posted by Patrick Pritchett at 9:58 AM No comments: