The Image of the City - Copley Square

Copley Square in Boston, where the Boston Marathon always finishes, is one of my favorite urban spaces in the world. The skyline is defined, on the west side, by the squat but dignified Boston Public Library, with its Victorian-era bronze statues of feminine virtue perched on thrones and its roll call of the illustrious names of humanism (DaVinci, Agassiz, Rousseau) carved into the building’s façade. Across from it, and just to the south, separated by a generous swath of the square itself, rises the shiny and bewitching splinter of I.M. Pei’s Hancock Tower (which a student of mine at Northeastern once wrote a first-rate paper on). 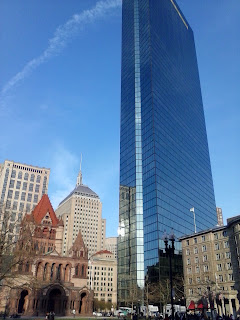 In between sits H. R. Richardson’s magnificent Trinity Church, a kind of happy Gothic fin de siècle folly that’s all Romanesque curves and spires. And just across from that, on the south side of the square stands the elegant Fairmount Hotel, a place where Ingrid and I, back when we were grad students and poor as mice, occasionally repaired to for martinis at the fabled Oak Room, a Boston institution, where they serve them in carafes plunged into smoking buckets of ice.

Just around the entrance to the old library, on Boylston Street, outside the steps to the inbound Green Line T Station a perpetually happy guy hands out copies of The Metro, a nationally syndicated free paper. He’s like the Mayor of Copley – he always makes you feel welcome, no matter how crappy the weather or how tired you feel at 7:00 am.

Oh, and there’s also a CVS and a Panera’s.

I feel inexplicably happy whenever I walk through Copley Square. It doesn’t matter what time of day it is. Early morning or late at night. Bright sunny day or total Nor’easter shit show. It’s a space that invites you to look; to be part of the city and join in its cosmopolitanism. A space that asks you to take it in, but which never overwhelms you. It’s perfectly scaled. Large enough to inspire a sense of delight, but small enough to make you feel that what makes a city great is the way it creates a sense of intimacy amid such impersonal structures. For me, it embodies the essence of city living – the hustle and bustle, the dirt and the grime, the greenery and fountains and stone, the mad dashing taxis and the vibrant assortment of street people, office workers, skateboarders, and beautiful women, but also the richness of a detailed and intricate and somehow serene place.

A great part of its charm comes from what Boston architect and MIT professor Kevin Lynch outlined in his famous 1960 book, The Image of the City. Copley Square, to use some of Lynch’s seminal terms, combines in a lyrical way such features as landmarks and paths, while acting itself as a major node -- all elements by which we make our cognitive maps of complex urban environments.

Above all, I love the layers of architectural styles on view in Copley, the way the old butts up against the new and the new reflects and enhances the old. Pei’s tower shimmers like a mirage from the future, while Trinity Church’s rosy stone incarnates a nostalgic dream of the past. This, I think, is the good modernity.

Walking through Copley Square makes me feel a bit like Frank O’Hara. The Frank O’Hara who wrote, in “Meditations in an Emergency,” that “I can’t even enjoy a blade of grass unless I know there’s a subway handy, or a record store or some other sign that people do not totally regret life.”

Well, yes, this is an emergency.

And yes, the whole world is in a state of emergency. And yes, Boston is not Baghdad, is not Kabul, is not Aleppo. But right now, it’s bleeding.

And right now I could really use a blade of grass. And since there are no more record stores, a bookstore would do very nicely.

I’ve always thought marathons were absurd and preposterous events. Expressions of the cult of excess, they seem to exemplify the metastatic logic of capital, promising spiritual liberation through grotesque labor, engulfing its participants in a massive spectacle that has just a little too much of the air of martial rallies of the 20th Century for my comfort. A product of the same era that gave us Teddy Roosevelt's exuberant (not to say hysterical) paean to masculinity and nationalism, "The Strenuous Life," (which we're studying just now in a Harvard course on the cultural logic of Manifest destiny), they purport to celebrate such civic virtues as sacrifice and dedication and the triumph of the individual over the odds: avid displays of endurance and athleticism which the ancient Greeks would have found bewildering since arête depends on moderation and balance. To say nothing of the fact that each time a marathon is run, it reinforces an unconscious Orientalism by marking the victory of classical Greek Civilization over the barbarian East.

Fortunately, as if to counter my Adornian pessimism, Dave Zirin has written a very moving article, at The Nation on the first woman to have run in the Boston marathon, Katrine Switzer. It offers a potent account of why sports matter.

And anyway, I’m not sure I think that way anymore.

Because maybe such an event is how the religious has migrated into the secular. And maybe the celebration of the communal and the absurd transcends any critique. But above all, because we can’t allow ourselves to live in a world where a bomb is more powerful than a footrace. Or a poem.

Posted by Patrick Pritchett at 7:43 AM No comments: