THE EXPANSE, or “Remember the Cant” (as in the nefariously destroyed ice hauler space ship, The Canterbury)

Finally catching up with the SyFy channel’s THE EXPANSE, which first aired in 2015, and is now available on Amazon Prime. I’m currently consuming about two a day, trying to pace myself – about halfway through at S2:E4. It’s easily the best serial SF drama since "Battlestar Galactica". 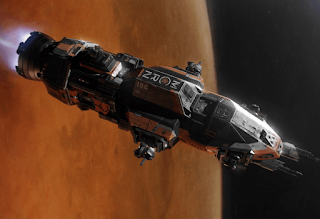 Unlike BSG, though, it’s committed to a hard SF realism. No FTL or jump drives. No vagaries about galactic coordinates. It all takes place in-system, on an interplanetary scale (distances which we still cannot begin to comprehend) between the Inner Planets and the Outer. And aside from a realistic storyline about space-faring Mormons, there’s no religious mumbo-jumbo, no poorly conceived red herrings about polytheism.

(I am reminded, however, of one of the Appendices to DUNE, where Frank Herbert, writing a future history, meditates on how actual interstellar travel would disrupt and remake religious belief. “The first space experiences, poorly communicated, and subject to extreme distortion, were a wild inducement to mystical speculation.”) For that matter Norman Mailer gets down to it in Of a Fire on the Moon. “It was conceivable that man was no longer ready to share the dread of the Lord.” Nevertheless, it’s good to recall that what made BSG great was the way it tackled terrorism, intolerance, class, genocide, and you know, the nature of humanity and all that shit.

"The Expanse" obviously borrows a great deal from Alfred Bester’s groundbreaking 1957 novel, "The Stars My Destination," which as all SF readers know, pointed the way for the New Wave and cyberpunk. Bester imagined a future world ruled by transnational and transplanetary corporations and indeed, the bad guys in The Expanse are a corporation called Protogen, a deliberate echo of the villainous power in Destination, the Presteign Corp. The elite badasses of the Martian Marines in the show are straight out of Bester’s Martian commandoes. Earth vs. Mars, vs. the Belt and the Outer Planets, ditto. There are other allusions and debts as well, ranging from PKD’s “We Can Remember It for You Wholesale” (the basis of both Total Recall movies, with their savage depictions of deep space miners as exploited proles), Heinlein’s "The Moon is a Harsh Mistress" (Luna to Terra: fuck off) and Kim Stanley Robinson’s utopian Mars trilogy. There are even a few nods to Alastair Reynolds (for Fred Johnson, “Butcher of Anderson Station,” read Nevil Clavain, “Butcher of Tharsis” -- that’s on Mars, for you landlubbers). 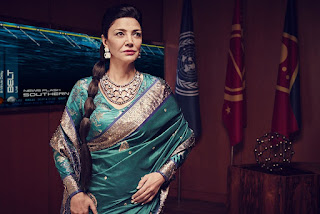 "The Expanse" features any number of first-rate performers, including the wiry, jangly Thomas Jane as a somewhat shopworn noirish cop and the brash, sensual Dominique Tipper as a conflicted Belter named Naomi Nagata. Cas Anvar, who plays Alex Kamal, is terrific as well: a true-born Martian of Middle Eastern descent who talks with a Southern drawl and is not only an ace gunship pilot but knows how to cook too. But it’s Shohreh Aghdashloo, the distinguished Iranian-American actress, who steals the show. There's more than a touch of Orientalism to her costuming. But she's a player whom the other players obviously respect and fear. And she gets shit done. In the role of Chrisjen Avasarala, an ambiguous Realpoiltik U.N. deputy under-secretary, she turns in the most layered and compelling performance of the series, as well as the sexiest. Her every appearance announces itself with a flourish of silent trumpets. She is stateliness itself, reader. Regal, imperious yet human and compassionate. Ruthless and cunning and almost telepathically brilliant in reading motive and trying to stop an interplanetary war. She out-Galadriels Galadriel and I could listen to her read the phone book all night, if they still made them.

"The Expanse" starts out trodding what feels like familiar ground, esp. in its Outer Belt settings. They owe a good deal to Paul Verhoven's set design for Mars in "Total Recall." But they are to a purpose: investing the viewer with care for each new character as they are introrduced as well as mapping the complex and treacherous political terrain of a 23rd Century that is a far cry from the utopian post-scarcity scenarios of "Star Trek" or Iain Banks' Culture novels. Gradually the political intrigue, noirish elements, and thrilling space battles are very quickly turned to fresh account. And as the mystery begins to unravel, we catch alluring glimpses of a very cool and very disturbing Novum: the alien or extra-solar MacGuffin called the protomolecule.

Before he died, Stephen Hawking, whom the world press tends to treat as some kind of cosmic savant, delivered a set of rather standard alarms about possible future hazards for our species that were treated as oracular pronouncements but are commonplaces for SF readers. One of them had to do with the necessity for humanity to extend itself beyond one planet, to colonize other planets and whole systems if it is to survive. But The Expanse, despite individual acts of heroism, shows just how vain and futile such a notion is. Putting Whitey, or anyone else for that matter, on Mars – on Ceres, on Titan, on Europa, on Proxima Centauri -- merely replicates the forces of enslavement and privilege that already dominate human history here on this planet. What good is reaching for the stars if all we do is spread our toxic brew of cruelty and dispossession across the incalculable reaches of deep space? Since SF has such strong roots in Utopian ideology, as Jameson has shown, one hopes that the series finale might offer some kind of transcendent outcome. Season 4 will be here soon. Stay tuned!

Post-script/spoiler alert!: having finally viewed all three seasons I can only reiterate my enthusiasm for "The Expanse." The momentum of the whole first 2 and a half seasons comes to a very satisfying climax in S3: E6, "Immolation." Jules Mao and his evil scientist brought to justice, along with the conniving Errinwright; Avasarala triumphant; and the greater purpose of the protomolecule revealed (or at least strongly hinted at). After that, the series pivots to a much vaster, well, expanse -- a nice nod to "2001" and seemingly galactic in scope. A bit of momentum is lost with a tedious revenge subplot, but no matter.

My pessimism about humanity acting as an interstellar virus is confirmed by James Holden's grim remark played with understated heroics by Steven Strait) that the protomolecule's evolution into a Stargate only invites "another blood stained gold rush." The final episodes give the beleaguered Belters, those gritty working class heroes, their moment in the spotlight. Esp. Cara Gee's slinky, stoic, cynical, but deeply loyal, Drummer, who emerges as one of the standouts in a cast that is remarkable for how many strong female characters it boasts. "Beltalowda!"

Posted by Patrick Pritchett at 3:53 AM No comments: