Just at the outset of his career, American poet Keith Jones is already writing with the confidence and élan one expects from a fully mature writer. His scintillating poems are both demanding and vibrantly lyrical, steeped in the disjunctive complexities of the modernist legacy. His work so far, collected in two short, but powerful, books, demonstrates a deep commitment to the intricacies of the dissonant word and its multiple, fragmented registers of melos and meaning.

Jones’s first book, Surface to Air, Residuals of Basquiat (Pressed Wafer) was a finely textured response to the late painter’s work through a series of tightly symmetrical poems: three stanzas with two lines each, and a final couplet set off in counterpoint at the bottom of the page. Stark and antiphonally layered, they had the effect of opening up Basquiat’s methods in surprising ways, illuminating both his work and his life from a variety of angles. 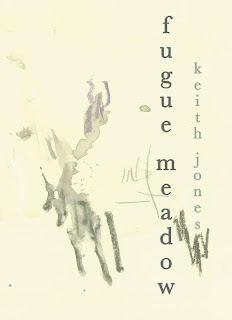 Fugue Meadow, his latest book, is similarly keyed around another path-breaking postmodern artist, jazz trumpeter Don Cherry who in 1969, with drummer Ed Blackwell, recorded Mu, a double-album that many consider to have sounded the first notes of world music. The book is dedicated to recent victims of racial violence in America, Michael Brown and Eric Garner among them, making a direct link between the cruel inequities still visited upon black Americans and Cherry’s vision of a polyracial musical paradise. As Jones writes in the opening poem, the new still carries a revivifying power:

Like Cherry, Jones is concerned with the weave and fold of sounds and words. How folding and refolding generates new sounds, new connections, a set of new possibilities for the poem. Or as Jones puts it elsewhere, in what might be a statement of the book’s defining principle:

We are a new theft
at the limit
of the borrowed


Poetic imagination thrives on theft. So the limit of the borrowed is also the threshold of the utopian still-to-come. The utopianism of Cherry’s music is announced in the album’s title – “Mu,” for music (and Fugue Meadow rhymes and echoes that with its first syllable); but also “Mu,” the legendary lost continent in the Pacific whose prehistoric destruction by geological cataclysm led to a vast global diaspora, a seeding of peoples and customs from India and Peru to Greece and Egypt.

Mu, like OM, might also be thought of as an attempt to represent the ultimate phoneme, the original sound which gave rise to all other sounds. Indeed, as Nathaniel Mackey, whose own “Mu” series derives loosely from Cherry’s music, notes in his preface to Splay Anthem, “any longingly imagined, mourned or remembered place, time, or condition can be called ‘Mu.’”

”Mu” in this sense is less a piecing back together of lost fragments from some original whole, than a vision of a utopia-to-come. “Mu” represents a new global potentiality – the belated emergence of a world sound that is also, in Hegel’s term, world-historical, signaling through music Spirit’s coming into a new awareness of itself.

But where Mackey takes “Mu” as the basis for an ongoing mythopoetic series investigating the afterlives of diaspora, Jones’ focus is narrower; resolutely historical, a tapline into personal echoes and resonances evoked by Cherry’s powerful and haunting music.

I go in from Syracuse nude & with energy. to find the space: the infinite series:

the arc’s quiet math: “Do not disturb my circles”

I am painting the air within, tree-limbed, pointing to night. I will roll the infinitesimal /

soldiers fleeing what you sing, now we say lunar, the tuck of spirit, big bold nothing
obscure

launching a thousand ships, caves-in the halo of yr ceiling

after you, chance is measure, chance

With its wry punning on the drummer’s name and a series of academic books published by Blackwell this poem draws together themes of intuitive seeking and political resistance. In a poetry dedicated to an “infinite series,” one that impels soldiers to flee by its unsettling music, chance can be the only measure. To follow the music where it leads you – no wrong notes, only next notes. Only next breaths.

In an audacious act of confidence, Jones invites his readers to follow the poems while listening to Cherry’s music at a website the publisher, Ricochet Editions, has generously provided. Fugue Meadow produces a multi-collaborative site, one in which poet, reader, and music interact and form recombinant modes of listening. “To duet/a numinous/sound.” Jones’ exquisitely calibrated poems offer an annotated deep listening – the most through-going kind of attentiveness one artist can pay another: not translation but response. There’s an acute, almost micro-tonal act of hearing at work here. The poems fall fold over fold into further fold – a force-field of folds, reticulate, echolaic. One example will have to suffice. This is from partway through “[Track Eight 0’42”]” – which corresponds to Cherry and Blackwell’s sublime composition “Bamboo Night:”

5’54”. heart round peak, like hard nipple, one go upland, toward sky
to dance. to get new, to ground many in love.
say it twice. with yr feet.
love dance
map.

A fugue meadow names both a musical structure and a field where rigid notions of cultural identity dissolve. To enter a fugue state is to carve inner time out of linear time – to be in time as time, singing it as its very transpiration and expiration, a breath consuming itself for the sake of withness and witness.

the sorrow with which it is twined

a vacating of loss in the kingdom of loss

an inquest, an inquisitor’s kiss

Breath is everything for the trumpet player and the poet, the caesuras here marking the necessity of breaks, little ruptures, in the texture of the lyric that allow the lost fragments of sunken Mu a way back into song. Fugue Meadow accomplishes what we long for song to do: to lose our way in order to find it; to undergo exile as a form of home.

Posted by Patrick Pritchett at 10:00 AM