“How did I know this city was made for love? How did I know your body would fit me like a glove? You’re killing me. You’re good for me.” 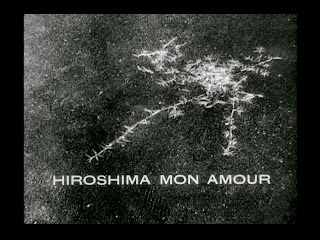 The first time I saw this film I was devastated. Yet I somehow came to think, naively, that it was pretentious, and even cynical, using the unspeakable atrocity of war as a mere backdrop for a love story. Seeing it again, after some twenty-five years, Hiroshima Mon Amour is more devastating still; time and loss have sharpened it. Pauline Kael famously panned it as a sop to liberal sensibilities, but the joke is on her. As so often happens in her prickly reviews, there’s a certain tone-deafness; the film itself is neglected in favor of scoring easy points on the smug self-regard of its art-house audience. But Hiroshima is not a film about peace, as Kael claims, but trauma and loss. It’s easy to understand, 55 years on, how she might have missed that, caught up in skewering both the adulatory reception given it by Dwight MacDonald and the sacred cows of Cold War sensibility.

The plight of the lovers, trapped in history, and the sudden impossible possibility of a resurrection (from what? from time itself?), elevates this film from a poignant account of a brief encounter to something else – the chance to redeem history’s shame and suffering. In nearly every frame, Emmanuelle Riva’s extraordinarily plastic face makes her the most beautiful woman in the world – beautiful, because so strikingly, hauntingly vulnerable, so deeply wounded and anguished by the ache for a love that still has the power to transfigure her again. In that moment – and this is the "magic" of cinema, that is, the way it cuts through time and space – she is every woman one has ever loved. Not a person at all, then, as the Architect says, but “a thousand women in one.” I can hear someone saying: but what about The Male Gaze? What about it? All cinema is about the pleasure of looking. If you don't get that, you don't get the mythic power of the movies. All the same, the great achievement of Hiroshima lies partly in how this romantic attitude is slowly dismantled so that Riva’s Actress becomes not a thousand women, but one: a singular suffering person, deranged by the memories of her dead German lover. 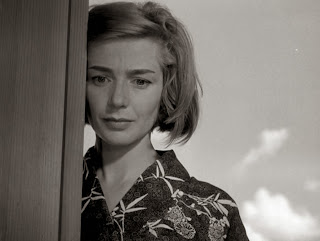 The lovers in Hiroshima are not so much doomed by their tragic pasts as by their hope for a future that hovers just outside their grasp. Both of them married, happily as they confirm to each other, they stand for an unspeakable truth, one that carries forward from Tristan and Iseult to Bringing Up Baby: that real love, the love of passion, the love of an incinerating spiritual flame, has nothing to do with marriage, cannot ever be sustained by marriage, has no chance of surviving marriage into something resembling permanence, and yet wills itself all the same into being through a reckless ardor, an unmasked devotion, an absolute nakedness before the other that renders everything else puny and insignificant, its sole justification asserted through a kind of majesty and delirium which cannot settle for anything less. The soul burns up in this kind of love. It asks to. For this is the damnation of secular transcendence and is its own theology, founded perversely on the same logic that underwrites the communal virtues of self-sacrifice and family. Love not as continuity, but entropy.

In his essay for the Criterion Collection edition, Kent Jones notes how revolutionary and influential Resnais’ innovations with temporal sequencing have been, liberating several generations of filmmakers to break with conventional narrative technique and play with a film’s sense of time and duration. To cite merely one simple example: the somber, lyrical, carefully matched montages of street scenes from Hiroshima and Nevers, each one cut on a slow zoom out to create a hypnotic continuity, the past reaching into the present, the present always contiguous with the past. This strategy is repeated at least one more time, in the late-night bar where the Actress reveals her tortured past to the Architect. (Is it a coincidence that each of them builds things in time, the one on celluloid, the other in brick and steel?). Duras’ fractured chronology lays bare the wounds of time: the way we live our lives continually in both the past and the present. This delicate interweaving gives incredible power to the Actress’ lament for transience: “I tremble at forgetting such a love.” For to forget is to become unmade oneself, dissolved, rendered invisible inside the relentless currents of history’s obliteration.

Redemption, if it is that, comes guardedly and provisionally in Hiroshima Mon Amour. It is not merely a case of amour fou blindly seeking to cancel all debts. For the film concludes neither with doom nor transcendence, but a collapse or return to the real as the two nameless lovers seem to see each other for the first time, re-naming the other after the sites of their natal traumas: “Hi-ro-shi-ma. That’s your name.” “Yes. Yours is Nevers. Nevers in France.” History is inescapable. It brands us all. As Cathy Caruth observes, “history, like trauma, is never simply one’s own... history is precisely the way we are implicated in each other’s traumas.” Its apocalypse, if you will, is that history will always irradiate the self with the broken shards of its shattered landscapes, its intimate and inadmissible wounds, and the bodies of the lovers, revealed in all their beauty and humility – the smoothness of their skin, their unrefracted smiles, the shyness of their gazes – must carry it, haltingly, fully aware of both their own transience and the power of love to utterly surprise and devastate them. 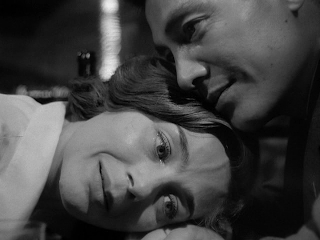 Perhaps then, love is a form of the weak messianic power. As Benjamin notes in the second thesis of “On The Concept of History”:

“The picture of happiness which we harbor is steeped through and through in the time which the course of our own existence has conferred on us. The happiness which could awaken envy in us exists only in the air we have breathed, with people we could have spoken with, with women who might have been able to give themselves to us. The conception of happiness, in other words, resonates irremediably with that of resurrection [Erloesung: transfiguration, redemption]. It is just the same with the conception of the past, which makes history into its affair. The past carries a secret index with it, by which it is referred to its resurrection. Are we not touched by the same breath of air which was among that which came before? is there not an echo of those who have been silenced in the voices to which we lend our ears today? have not the women, who we court, sisters who they do not recognize anymore? If so, then there is a secret protocol [Verabredung: also appointment] between the generations of the past and that of our own. For we have been expected upon this earth. For it has been given us to know, just like every generation before us, a weak messianic power, on which the past has a claim.” (Translation Andy Blunden, from Marxist.org).

The plangent austerity of Hiroshima Mon Amour does not permit us to forget that claim or the secret protocol by which the past aligns itself to the present and the ever-imminent hope for some small measure of happiness which it might still contain.

Posted by Patrick Pritchett at 7:16 AM No comments:

Song in Praise of the Lord of the Mark

The Lord of the Mark rode forth with all his hosts,
horse-tailed helmets flashing and a forest of tall spears.
He got as far as Worcester and decided, um
this War against Sauron? Not really his thing.
He turned & descended on Ralph’s Chadwick Square Diner
to watch the Patriots and Broncos wail on each other.
Muster the Rohirrim.


The Lord of the Mark rode forth in glory! Das right.
To Stop and Shop to be precise.
Looking for some of that totally excellent Tuscan wheat bread.
They were out. They’re always out.
What’s a King of Rohan gotta do around here?
I mean, I gave you people Helm’s Deep already.
Fuck it. Fell deeds awake! Ride to fire and slaughter.

The Lord of the Mark has no wife. Which seems kind of weird, really.
But Eowyn makes goo-goo eyes at Aragorn and for once
you wish he didn’t have such a Numenorean stick up his ass.
But once a shield-maiden always a shield-maiden, am I right?
Unless you happen to smite a Nazgul. Oh yeah.
The flowers in Gondor are lovely this time of year.
Begone, foul dwimmerlaik!


The Lord of the Mark has a new immigration policy:
more Ents, less Orcs! Bastards make a huge mess
and refuse to clean it up. What am I, the lord of welfare?
Still, they’re rather handy for target practice.
Memo to self: order that new armor from Amazon
worked with cunning shapes and shit.
Great heart will not be denied.


The Lord of the Mark has had enough, people!
Entreaties from loyal subjects? Ruling
with a firm but merciful hand? Am I not Theoden King?
OMG freaking Erkenbrand with his Powerpoint
presentation on next season’s wheat yield. Super-lame!
Cue spears clashing on shields. “I totally need a vacation,” proclaims the Lord of the Mark.


Ride now to ruin and the world’s ending.

Posted by Patrick Pritchett at 4:43 PM No comments: