IMAGO for the fallen world

Matthew Cooperman’s 2011 STILL: Of The Earth as The Ark Which Does Not Move was an incendiary book of poems, a harrowing late modernist jeremiad trembling with the vehemence of its perceptions. It took its place alongside the work of Amiri Baraka and Cooperman’s old mentor, to whom he paid homage, the master assassin of bourgeois pieties, Ed Dorn. The book was stunningly laid out, with a mix of typographical fonts drawn from commodity and pop culture, as if the poem was simultaneously invaded by this language and trying to metabolize it. Interleafed with the poetic sequences – each one titled “Still:” – were pages of bold white text on stark black backgrounds, a kind of photo-negative, with disjointedly laid out quotes from Hart Crane, Harriet Tubman and Paul’s Corinthians, among others. They interrupt and stitch the rest of the book together rather like prayers of intercession or warnings to the reader. The whole book is a three-tiered reticulated marvel, with the chant sections hinged by calmly meditative passages, as in “Still: Fighting.”

HubbleVox II: I am Super Nova X and Nebula Y, and the prophecy of heat death Chant:

“On Donner, On Blitzen, On Hellfire, On Humvee!”


This finely leveraged mix of polemic and pastoral both invites and estranges the reader and it’s a tension the book maintains throughout.

Cooperman’s career has been fascinating to watch unfold. His first book, A Sacrificial Zinc, (2000) was an accomplished debut of journeyman work, filled with sensitive reports on experience, yet not really all that distinguishable from a great deal of other poetry being produced by his generation. 2006’s DaZE signaled the beginning of his shift away from a certain kind of graceful, well-behaved poem to the exploration of more daring formal possibilities. The poems of DaZE draw from experience, but they take place in the land of language. With Still, Cooperman has parted company with grace and is swinging for the fences, something that very few poets these days have the ambition to undertake, content either with fussy experiments of a bankrupt avant-garde, or the Jim Tate school of goofball sublime, which only Tate really knows how to bring off. Jena Osman’s recent Public Figures is a strong example of work that pushes through the boundaries of what a poem can do, combining images and text to produce a powerful critique of social space, military idioms, and the political unconscious. But where Osman’s characteristic surface tone is starched and clinical, denuded of affect, Cooperman’s surges with intensity. 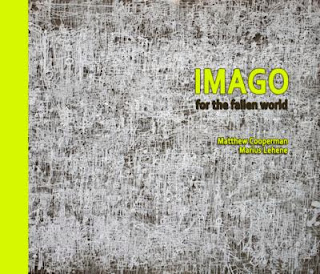 Now comes Imago: for the fallen world. Imago continues the thrust for the vitals of late capital begun in Still and can be read as a further opening of the same field; not a sequel, but a fresh attack along the same vectors. It’s an audacious work in every sense, its pitch ranging from the colloquial to the elegiac. Written in collaboration with the visual artist Marius Lehene, Imago complicates and enriches its critique of the decaying moment with gorgeous and disturbing full-color images on nearly every page. The full effect is difficult to suggest. Imago is really two books in one, two parallel and overlapping formal structures that complement, interrupt and re-align each other at every stage. The juxtapositions generate a swirl of impressions that are entrancing, but also unsettling. To give one brief example, from “Still: Policy”:

Utopia: is a virus I am anxious to be rid of. I move to
many addresses to begin my true discovery. We are
always looking back and the real day is all in front of us.
Given is a word to a more developed world, a flag we fly,
and we possibly in it.

Lingis: what gifts give us is the ability to give gifts.

Facing this poem on the right-hand side is one of Lehane’s images: what looks like a treated photograph, possibly painted over, or possibly a water-color, taken from above, of a crowd of robed and hooded figures, mainly women, standing on a pier. The crowd occupies a narrow strip in the foreground, while the majority of space is dominated by rippling water. A small boat pushes its way into the frame on the lower right side. The perspective is flattened. Are these people refugees? Religious pilgrims? Or merely waiting for a ferry? Cooperman’s facing text suggests that the dream of a utopian social order must allow greater mobility. Movement, arrival and departure, is essential to a new kind of nomadic structure, one that abjures fixity, because the desire for utopia must always be more important than utopia itself. And yet, the need for fixity runs deep. To travel by water is one thing. To be like water quite another.

Cooperman and Lehene’s work fulfills one of Adorno’s injunctions about late modernist aesthetics in the age of perpetual crisis and disaster: “Art is true to the extent to which it is discordant and antagonistic in its language and in its whole essence, provided that it synthesizes those diremptions, thus making them determinate in their irreconcilability. Its paradoxical task is to attest to the lack of concord while at the same time working to abolish discordance.” The “many addresses” of Imago refuse to be unified into a single location. Utopia, to paraphrase William Gibson, is always arriving; it’s just unevenly distributed. It is nowhere and everywhere, a ghost stalking the perimeter of desire. This wild, insurgent, chaotic and disturbing book keeps asking the question, “can you hear me now?” As Cooperman writes, near the end of Imago, “the body is a call in the dark.” The whole poem is a straining to listen to that call and form some adequate response.

Posted by Patrick Pritchett at 6:49 AM No comments: