Only Angels Have Wings

In some ways this is just another piece of Hollywood hokum. It asks to be liked a little too much. But the often creaky stageyness of the script, bristling here and there with delightfully flippant banter and period sangfroid, by Jules Furthman, who would go on to co-write, among other classics, The Big Sleep and Rio Bravo, transcends its genre-bound conventions, through the extraordinary charisma of its leads, a bitter, cynical Cary Grant, and the ineffably luminous Jean Arthur, whose face is held in such loving close up it’s practically theophanic. Above all, though, it’s Howard Hawks’ superlative direction that lifts this story to a level of melancholy sublime that epitomizes the wages of modernity. Those wages are paid out in trauma and the failure of the human body to adapt to it. In some ways, this film looks ahead to the “maximum effort” of the pilots and crews in Henry King’s 1949 Twelve O’Clock High. It’s an allegory, in other words, about how the codes of masculinity struggle to conform to the pressures of the machine age.

In Only Angels, this notion of sacrifice is transferred to commerce and the expanding trade in global communication networks – namely, airmail. The pioneering spirit of St.-Exupery shadows this film. Books like Night Mail (about flying in Argentina) and Wind, Sand and Stars (on the perils of early aviation over the Sahara) set the tone for Only Angels, with their emphasis on grace under pressure and the high hazards of this radical new form of extending man’s physical universe.

This is where Hawks’ genius for what drives men working under intense pressure comes in. For him, the job of carrying airmail is charged with an existential demand: either live up to those demands, or fail nobly. Caving in to fear is a fate worse than death. It exiles you from the community. Doing the job, right, and with a certain devil-take-the-hindmost sense of honor, defines the meaning of manhood. It's not Roosevelt's "The Strenuous Life," but it's not far from it either since so many of Hawks' code heroes are only playfully ambiguous. Their real duty is to uphold the social order. In its depiction of men who live on the edge, Only Angels seems made as a tribute to the calamitous trauma of the First War (with a nod to Hemingway, whose “To Have and Have Not” Hawks would later adapt, brilliantly, with Furthman working alongside Faulkner, as a sort of coda/companion piece to “Casablanca”).

All the classic Hawks themes are here: the codes by which men in crisis live – their cynicism, their camraderie, their crude tenderness. The wrenching death of dedicated men (Joe and the incredibly sweet Kid, so memorably portrayed by the great Thomas Mitchell) and the redemption of a fallen character like the one played by silent star Richard Barthelmess, who’s paired with an incredibly young and feisty Rita Hayworth. The job of carrying the mail becomes infused with a higher moral purpose – the continuation of culture itself, and of course, beyond or concurrent with that, the propagation of a ruthless spirit of capitalist and imperialist expansionism, which the film obfuscates by linking this expansionism to ideas of individual valor and accomplishment. Thus the groundwork for establishing a global communications network is yoked to the thing it most endangers, subjective agency. The will to bravery, the ideal of self-sacrifice for the larger or common good, is simply a means to a larger corporate end. Such considerations have no place in Hawks' films. They seem to exist in a timeless, mythic place, unanchored from history. 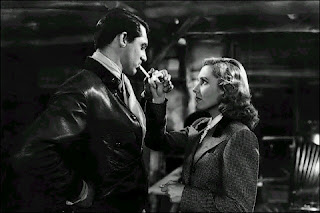 Only Angels, in its very title, points to the problematic of asking men to lay down their lives impossibly for the higher call of the transcendent, which in this case, is serving the cause of the system. Yet it valorizes that sacrifice by making noble heroes of The Kid, of Joe, of Cary Grant, and the game, but finally subservient, Jean Arthur, who gives up her independence in exchange for kowtowing to Grant’s overwhelming and over-literalized phallic power – the crude miniature airplanes the film fetishizes over and over, emphasized by the very large pistol swinging from Grant’s hip throughout the picture.

Having said all that, I still love this film and always will. Jay Cocks once told me that for him a lot of Hawks had badly dated. He may be right. Hawks is more rooted or mired in his time than someone like John Ford. Though many of his films have a loping, graceful quality to them, they can also come across somewhat stilted. Still, how can His Girl Friday or The Big Sleepor Rio Bravo be dated? (Actually, this last one has worn a little for me). Nevertheless, I will always carry a deep affection for Only Angels Have Wings, which conveys the power of what it’s like to risk everything on a chance and a dare. Hawks' vision of the job of the pilot is both mundane and poetic. Charged with the task of delivering the mail in often dangerous conditions, his pilots adopt a nonchalance that masks, or rather expresses, a deep romanticism, a way of reclaiming the labor of the individual from the job itself. They know full well what it may cost them, but they do it anyway. This may be a myth, but it's a powerful, maybe even a necessary one to combat the alienation of modernity.

Posted by Patrick Pritchett at 3:38 PM No comments: