There’s an extraordinary excitement coursing through these new poems by Mark Scroggins. Electric with a kind of headlong internal enjambment & melodically stuttering parataxis (modernist spasms of ecstasy run face-first into moral entropy), they vibrate at a pitch where desire topples into the forbidden, the decayed, and the just plain nasty.

Torture Garden takes its unsavory name from a book of the same title I’m not likely ever to read, Octave Mirabeau’s kinky, savage satire on fin de siècle ethics. Formally, though, the poems take their cue from Zukofsky’s magnificent 80 Flowers – using 7 lines per poem rather than 8. But they're more than a gesture of homage from LZ's biographer; these poems stand wildly and entirely on their own as late modernist vignettes of metropolitan shock, snarling with polyglot street-smarts.

Intricately woven and tensile with thick layerings, this poem nevertheless almost floats off the page. “Jersualem and sever/Athens unshielded” is an exquisite syntactical stroke that out-Oppens Oppen.

The “procedure” in Torture Garden involves mashing up the eight million; the book is lustrous with quotation and allusion, most of which are lost on me, I confess, though I was amused to find a poem using A.E. VanVogt’s classic SF novel about superhuman mutants, Slan, for its title. None of this feels forced or contrived – there’s a powerfully cohesive music in these truculent rhythms and oblique combinations. Put another way, it’s a display of brute force from end to end, all sheer velocity and collision, a strange new beauty emerging from the rejection of beauty, a poetics in which “thought experiment keeps the real.” I love these poems – they’re like fragments torn from the margins of Benjamin’s Arcades Projects, scenes from violent media landscape that are swarming yet oddly serene. Brimming with surprise and speed, and teeming with ghosts and weird echoes, they expand the dark horizons of language; baleful clouds racing above a city’s shadows.

I will tell it like
it is simple words training
the mind’s eye on water
sand sunlight the nipple astir
under cotton voyeur dancing webcam
hard northeast wind and premonitory
hints of snow zippers latex.
Posted by Patrick Pritchett at 2:36 PM No comments:

On Leave: A Book of Anecdotes

Keith Tuma's amazing new book, On Leave: A Book of Anecdotes, is just out from Salt. More than a collection of random tales, it's also a daybook, a meditation on the role of the anecdote in literary criticism, and some first rate readings of a wealth of great poems. It's brilliant and impossible to put down.

Besides recounting numerous anecdotes, delightful in themselves, about literary figures, Tuma provides a useful history of the genre and its study, while formulating a theory that tries to account for the vital role of the extra-literary in criticism. It's less a method, though, than a style; Hugh Kenner figures as one of its great exemplars.

The anecdote strand is counterpointed by two others. The first is an intermittent daybook of public and private events modeled after Hannah Weiner's Weeks. Here's a brief sample:

"Cubs off for the day; talk of recession follows talk of housing slump. Gonzales quits. A white bag of finch food hanging out back blows in the wind. One can't be bewildered forever; eventually you're just a clod of unknowing."

Tuma's wit is delightful and these passages prove every bit as enthralling as the classic anecdotes woven throughout. The practice of the daybook here becomes less about the recounting of events, then the flow of experience through language.

Tuma's peregrinations while on leave from Miami University, Ohio, form the second strand. Among these are his trip in 2008 to Orono, where we bumped into each other and he described the project to me. (Our hotel rooms were adjacent and I remember coming back from a panel and hailing Keith and Tom Raworth as they enjoyed an afternoon drink on the measly patio that opened out on to the parking lot. I was in too much of a conference funk to join them, though). 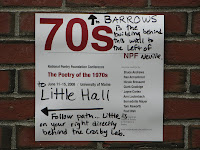 Then there are the anecdotes. Tuma has a fresh and easy way with them; indeed the whole book reads like a lark. There's the oft told classic of Jeremy Prynne and Tom Pickard's dust up at Sparty Lea, which I first heard from Ric Caddell in Durham. (Or was it Peter Quartermain in Boulder?) And another one about Alan Golding singing up a storm at Orono in 2000, well into the wee hours. I was at that party, too, matching drinks with Mark Scroggins, David Bromige, George Bowering, Linda Russo, and Tom Orange. It was my first big conference and I thought, if this is academic life, I want more of it. Of course, I suffered from a massive hangover all the next day.

And there's this, a recounting of a story told by Alan Shapiro (anecdotes are nothing if not promiscuously transmissible) that's a barbed allegory of the writing life almost too good to be true: