Core Samples from the World

Forrest Gander's remarkable new book, Core Sample from the World, has just been nominated for the National Book Critics Circle award. Gander, who studied geology as as an undergrad, makes sharp use of the idea of a core sample by shifting it from the vertical to the horizontal axis. Yet the book drills deep into the stratigraphy of the global human. 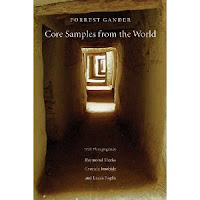 I've never studied with Forrest but he's been an extraordinarily generous supporter of my work, the kind that every poet dreams of. People revere him, and rightly so. Friends and colleagues who've worked with him, like Anna Deeny, Raul Zurita's translator, and Teresa Villa-Ignacio, whose powerful work on Edmond Jabes and Rosmarie Waldrop benefited from his eye, sing his praises. I think Peter O'Leary put it best when he said to me, "I'd take a poetic bullet for this guy." So would I. This nomination is richly deserved.

Here's what I wrote about Core Samples for Steve Evans' Attention Span 2011.

An itinerary of otherness, strewn with uncanny moments of tenderness and glancing blows that crack the fragility of conscience. The earth’s alien powder is sifted through, poured out, regathered in rich pulses of telluric current from the far side of everywhere. Poem, photo, and prose fold into and out of each other, remapping their own contours. The overlap and feedback amplifies into a kind of 21st Century global witness that is porous and humbling and strange. I can’t think of another book like it. Utterly extraordinary.
Posted by Patrick Pritchett at 5:38 PM